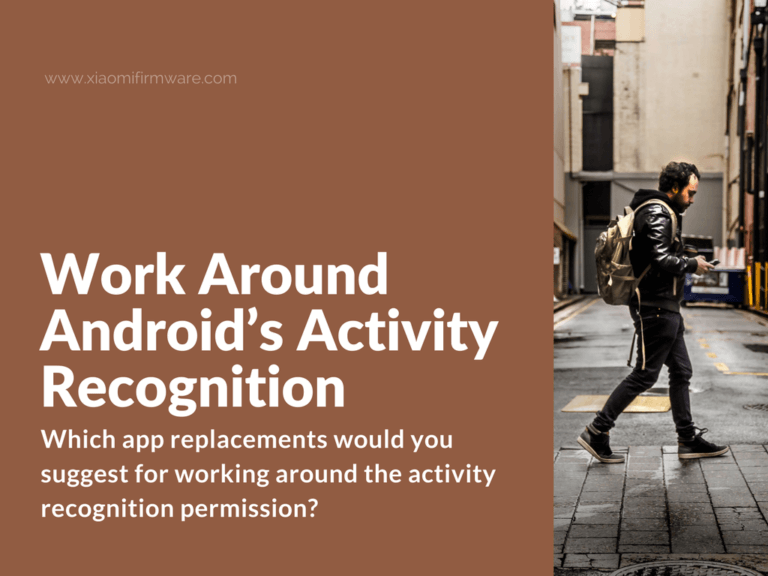 How to Work Around Android’s Activity Recognition

The activity recognition permission tells apps what you are doing at a given time. It can detect whether you are walking, running, or driving. It uses a service that has been part of Android’s core code for years now – the Activity Recognition API.

How to Keep Android from Sharing Your Physical Activity with Apps

For most people, this is not an issue if the app in question is a fitness tracker. Xiaomi users, for example, need the permission when using Mi Bands with the Lifelog app.

But recently, users are noticing other third-party apps asking for similar access. With the current Android update, even music apps like Shazam can now track your activity.

So out of privacy concerns, you may want to know how to stop activity recognition. Unfortunately, Android does not provide a straightforward way to do this. Users have to settle for workarounds – at least until Google offers a fix.

How to Limit Background App Activity?

A Redditor recently shared a screenshot of services that run in the background – 445 in total! Google’s ad and analytics software, for example, run every time you switch on your phone. They look at your usage trends with the intention of tailoring content for you.

Music apps like SoundHound and Shazam are no different. They offer an excellent user experience but have to keep on running even after you exit. But since they now use activity recognition, they might be violating users’ privacy.

SoundHound’s “OK Hound” feature, for instance, stays active to help you find songs quickly. In its website, it encourages you to “Try it out the next time you’re driving, cooking, studying, working, and so on.”

So, one way to limit their effect is if you use them only when you need them. That way, you can be sure that they do not share your activity when you don’t want them to.

Tools like Greenify can help to restrain background behaviors automatically.

But if you do not want to install an extra app, there is the option of doing it manually.

For this, you will have to know how to Force Stop. You could either:

The most logical thing to do if you are uneasy with an app is to uninstall it altogether.

But what would you do if you set your updates to automatic? Where apps install new features without your knowledge?

It is unlikely that Android might allow software to run services without your assent.

Every install brings up a popup listing what an app would use to function. You should thus be keen to deny access where you deem it suspicious.

There is also need to read developers’ notes on Google Store. They usually explain all the permissions that the software would ask for. And that is why Google discourages users from getting APK files outside the store. Untrusted packages may hide some details because they plan to exploit them later.

Finally, you could always find a replacement for any app that does not meet the privacy threshold. In Google Store alone, there are more than 3 million offerings. Every category comes with hundreds or even thousands of apps available for download. If one package asks for activity recognition, for instance, the next option may not need it at all.

Which app replacements would you suggest for working around the activity recognition permission? Please share in the comments section.