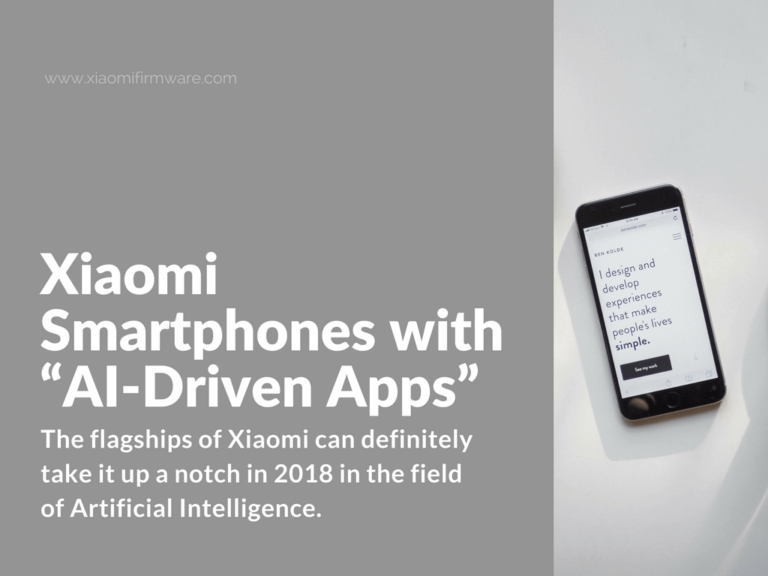 The smartphone industry is booming, given the groundbreaking technological advancements and enormous innovation involved in it. Technology has reached its peak in the present day and it’s safe to say that because of these advancements, it is getting easier to get the world in our grip.

The original equipment manufacturers (OEMs), a few years back took an initiative to focus on premium designs and building materials accordingly. The previous year, the attention had turned to quality of the camera and this year, 18.9 aspect ratios and slim bezels have been in the limelight.

What are these AI-Driven Apps?

Another brilliant aspect which is gaining importance ever passing day is that of artificial intelligence (AI). It is a well-known fact that one of the top companies in the smartphone industry i.e. Xiaomi is now expanding its business furiously not only in China but in India as well. The flagships of Xiaomi can definitely take it up a notch in 2018 in the field of Artificial Intelligence.

Xiaomi is one of the most promising brands launching amazing products, packed with powerful features and that too under prices which are reliable. Xiaomi CEO, Lei Jun recently shared his views about the potential of AI in the smartphone industry at a talk titled as “Opportunities for Xiaomi in the AI era” that took place in the Fourth World Internet Conference in Wuzen, China in 2017. In his speech, Lei mentioned that all of the present day internet companies will turn into AI companies and also suggested that the company’s line up of 2018 smartphones will have ‘AI driven apps’.

This might have been in reference to Xiaomi Mi7. He also mentioned that in the upcoming decade the major focus of Xiaomi would be on its AI capabilities. As per sources Xiaomi Mi 7 might be the first Xiaomi smartphone that would be powered by the upcoming Qualcomm’s Snapdragon 845 chip.

Artificial intelligence based technology is not absolutely new to smartphones. The first AI featured product launched by Xiaomi was the AI enabled speaker that was introduced earlier this year in July. One of the best sellers Xiaomi Mi Note 3 has artificial intelligence powered AI beauty feature. The feature that allows camera to automatically remove skin imperfections and other unwanted spots while clicking selfies.

However, most of this feature is dependent on servers that are cloud-based. Hence an active internet connection is required for usage of these AI-powered apps to process which on a certain level definitely poses security risks.

This is exactly the problem on which the company is now working on. In order to bring a remedy to this issue, the makers of smartphone chips have started integrating the components of artificial intelligence optimized neutral networking in the system-on-chips itself. For instance, Huawei had made a recent announcement of a Kirin chip along with a ‘neural chip’.

Recently Google has collaborated with Intel in order to make an image processing core. With such advancements from the competing brands, it can safely be presumed that Xiaomi might have something impressive for all of its users very soon.