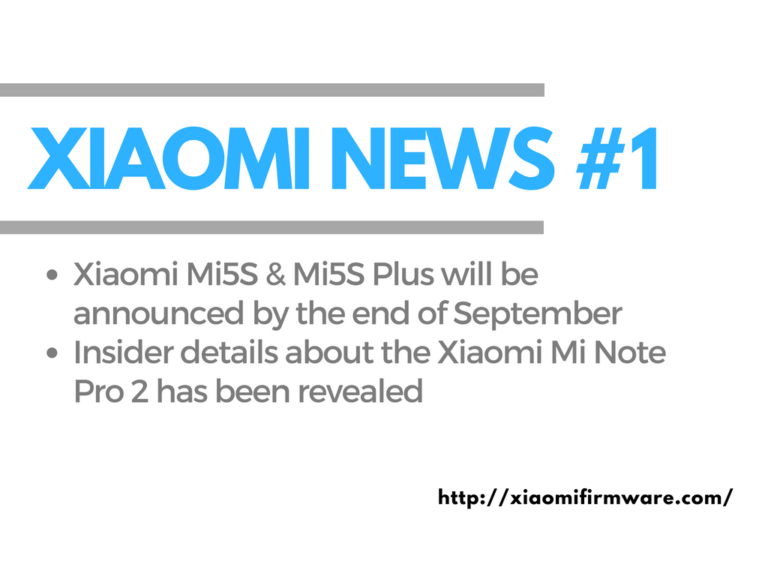 Xiaomi company just published a new teaser of upcoming Xiaomi Mi5S, according to which the new device will be shown on 27 September during the presentation in the exhibition center China National Convention Center in Beijing. In accordance with the latest leaks, Xiaomi Mi5S can get 5,15 inch screen with 3D Touch technology support, Qualcomm Snapdragon 821 chipset clocked at 2.4 GHz, GPU Adreno 530, 3/4/6 GB of RAM, and 64/128/256 GB drive. In addition to this, the device will be equipped with a 3490 mAh battery that supports a function of fast charge with Quick Charge 3.0.

As for the camera, there are rumors that Xiaomi Mi5S will be equipped with 8 megapixel and 16-megapixel main camera with  f/1.8, image stabilization and dual LED-flash, thanks to which user can now easily record videos in 4k with 30 fps. Smartphone with two SIM-cards will also support Wi-Fi, Bluetooth, 4G / 3G / 2G and NFC.

Together with Xiaomi Mi5S developers can also showcase another fresh device Mi5S Plus, which will also be running on Snapdragon 821. Xiaomi Mi5S Plus model will be equipped with 5.7-inch display with a resolution of 2K, 6 GB of RAM and 128 GB of internal memory, as well as ultrasonic fingerprint scanner.

What do you think about these specs and whether the device will be able to compete on the market?

According to the latest rumors during the upcoming September presentation Xiaomi developers will show 5.7-inch smartphone Xiaomi Mi Note 2 Pro.

Most likely, this device will run on Qualcomm Snapdragon 821 processor clocked at 2.6 GHz and 8 GB of RAM and 256 GB of internal memory.

I’m actually very interested in seeing this device and may be even bought it.