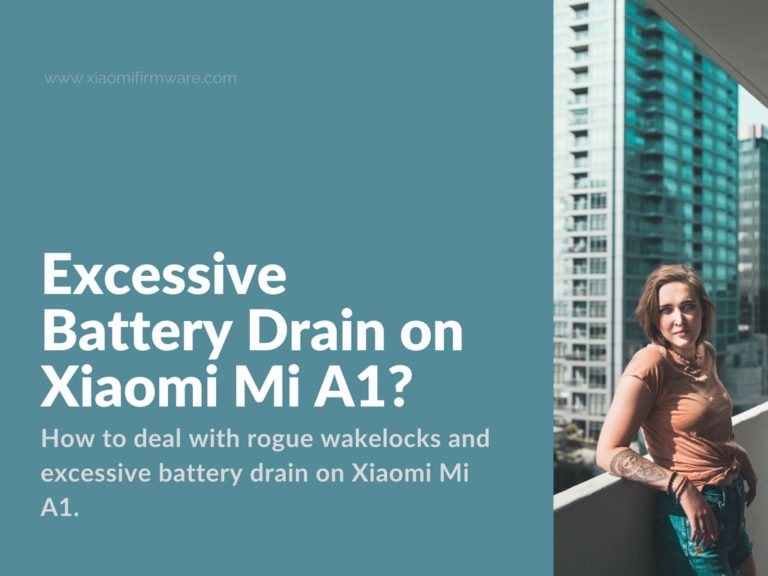 Excessive Battery Drain on Xiaomi Mi A1? Deal with Wakelocks

The Xiaomi Mi A1 has the chops to run multimedia content like a perfect, budget phone. It packs a Snapdragon 625 chipset, 4GB RAM, and 1080p screen combination. These give it the power to run most content with ease. Yet, users have complained about the excessive battery drain on Xiaomi Mi A1.

Is excessive battery drain on Xiaomi Mi A1 such an issue?

Many people are displeased about how fast their Mi A1s are losing battery power.

For example, XDA member felipovicc complained that his device didn’t go into deep sleep when it was idle. As the screenshot below shows, a kernel service named 7000000.ssusb used up to 59% of the battery power.

MIUI senior member Kintsugi also complained about 7000000.ssusb. He found out that it used about half of his Mi A1’s idle battery power. See the screenshot below.

XDA member AkCullen tried out a few things to reduce the excessive battery drain. Yet, despite stopping background apps and calibrating the battery his device lost about 80% of its power while in idle mode.

Smartphones have smaller battery sizes than, say, laptops or PCs. Battery life is thus a key concern for most phone users. Besides, most manufacturers market their devices by claiming that they can last a full day on a single charge.

Android 7 introduced the Doze mode to force devices to go into deep sleep. So, in ideal situations, a Xiaomi Mi A1 phone should activate Doze when its screen is off and a user has not touched it for some time.

Still, at times, apps need to wake up the CPU or screen to complete some tasks. These apps use wakelocks, which prevent devices from going into deep sleep fully.

Android’s PowerManager APIs expose wakelocks to apps. Using wakelocks, apps can then prevent devices from entering suspend mode. These APIs assume that wakelocks would work for short periods of time. So, once background services have completed their tasks, they are supposed to release them. Otherwise, wakelocks that linger on may drain battery power quickly.

Android Pie has introduced new ways of improving battery performance. The OS tries to give resources to those apps that need them the most. It uses two major features:

Thus, a simple method of improving the battery performance on Xiaomi Mi A1 is to install Android Pie.

Yet, poor app design causes some services to make excessive wakeup calls. Such applications may lead to quick battery drainage.

How to deal with rogue wakelocks on Xiaomi Mi A1

An earlier post shared tips on how to make the Xiaomi Mi A1’s last longer. It listed tactics like turning off Google Sync and disabling unused services. It also advised users to install apps like Greenify, BetterBatteryStats, and GSam Battery Monitor.

How to stop wakelocks on Xiaomi Mi A1 with root

This method uses the Amplify app.

Installing the Xposed Framework on Xiaomi Mi A1

With that out of the way, go ahead and install the Amplify app. Find the Play Store link above.

Use the app’s recommended defaults if you’re unsure of how to proceed. Otherwise, the app has ways of customizing the behavior of all services, alarms, and wakelocks running on your device.

How to stop wakelocks on Xiaomi Mi A1 without root

Wakelock Detector Lite and BetterBatteryStats do not require root access to manage wakelocks. Still, you’ll need to set up ADB drivers for the two to work.

You can use the Wakelock Detector method in two ways. One, where you install a chrome extension. And two, where you pass permissions to the app using the terminal/command line.

The app’s browser extension works on Google Chrome only. Thus, you’ll have to install the browser if you don’t have it on your PC already.

After that, you may use the app to stop rogue wakelocks by:

If you have the ADB drivers all set up, you should thus start managing wakelocks using the steps below.

After that, you may run the app on your phone to see which services are running excessive wakelocks.

If you’ve noticed an offending app/service or two, use the steps below to stop their wakelocks.

That’s it! You’ve managed to force your device to turn down all unruly wakelock requests.

In this post, we’ve seen that wakelocks may cause your smartphone to drain its battery power quickly. Remember, some Xiaomi Mi A1 users claim that the problem is so bad that they lose up to 80% of their charge in only two hours of idle time.

Remember, wakelock requests are not bad things per se. Still, if your device seems to lose its battery power without reason, you may have to install apps like the ones we’ve seen above. These will help you kill services or apps that misbehave.

So, these are just but some of the ways that may deal with wakelocks on an Android device. If you’ve tried them out, please share your experience in the comments section. Also, don’t hesitate to point out new, better ways of handling excessive battery drain.